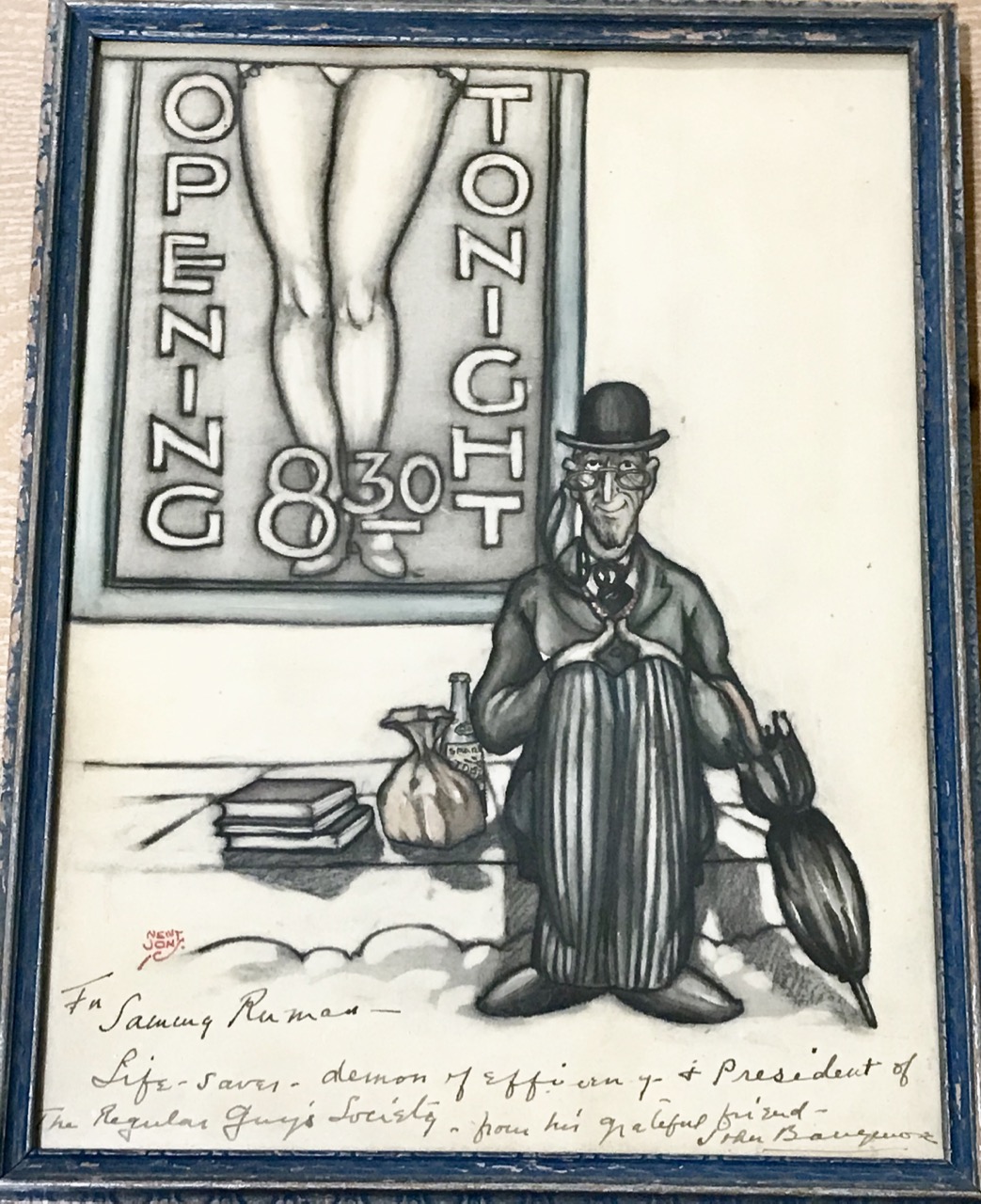 9”x11-1/2” ##### The drawing is by Newt Jons [aka Newt Jones] costume designer for the 1933 film Alice in Wonderland and makeup artist for another two dozen films and television series, including From Here to Eternity, Around the World in Eighty Days, and No Time for Sergeants. ##### Topaze is a 1933 pre-Code film starring Barrymore and Myrna Loy. Based on the play by Marcel Pagnol and adapted by Benn Levy and the great Ben Hecht, Barrymore plays Professor Auguste Topaze, an honest and naive schoolteacher gets a lesson in how the world works outside the classroom when a rich Baron and his mistress [Loy] use his name and outstanding reputation in a crooked business scheme -- bottled water with purportedly curative properties. Unaware that "Sparkling Topaze" does not actually contain the medicinal formula he invented, Topaze is stunned when an associate of the Baron threatens to expose the fraudulent scheme. His naivete destroyed, Topaze fights back by becoming even more corrupt than his mentor and succeeds in blackmailing the Baron into a partnership. In the meantime, Topaze steals the romantic attentions of Coco and is last seen escorting her into the cinema. Topaze was the first RKO film to play Radio City Music Hall and won the 1933 National Board of Review Award for Best Film. ##### Sam[uel] Ruman (1904-1969) was an assistant director on the film [uncredited]. Ruman worked on nearly fifty films, including Mighty Joe Young, Stagecoach Kid, and Zombies on Broadway. The inscription reads: “To Sammy Ruman / Life-Saver, Demon of Efficiency & President of the Regular Guys Society -- from his grateful friend - John Barrymore.” Artist Newt Jons is not listed in the film’s credits. ##### Provenance: from the estate of Sam Ruman, via his daughter Joan Perkal. ##### Condition: closely trimmed margins with some discoloration to the trimmed edges, not affecting the image. Otherwise fine.