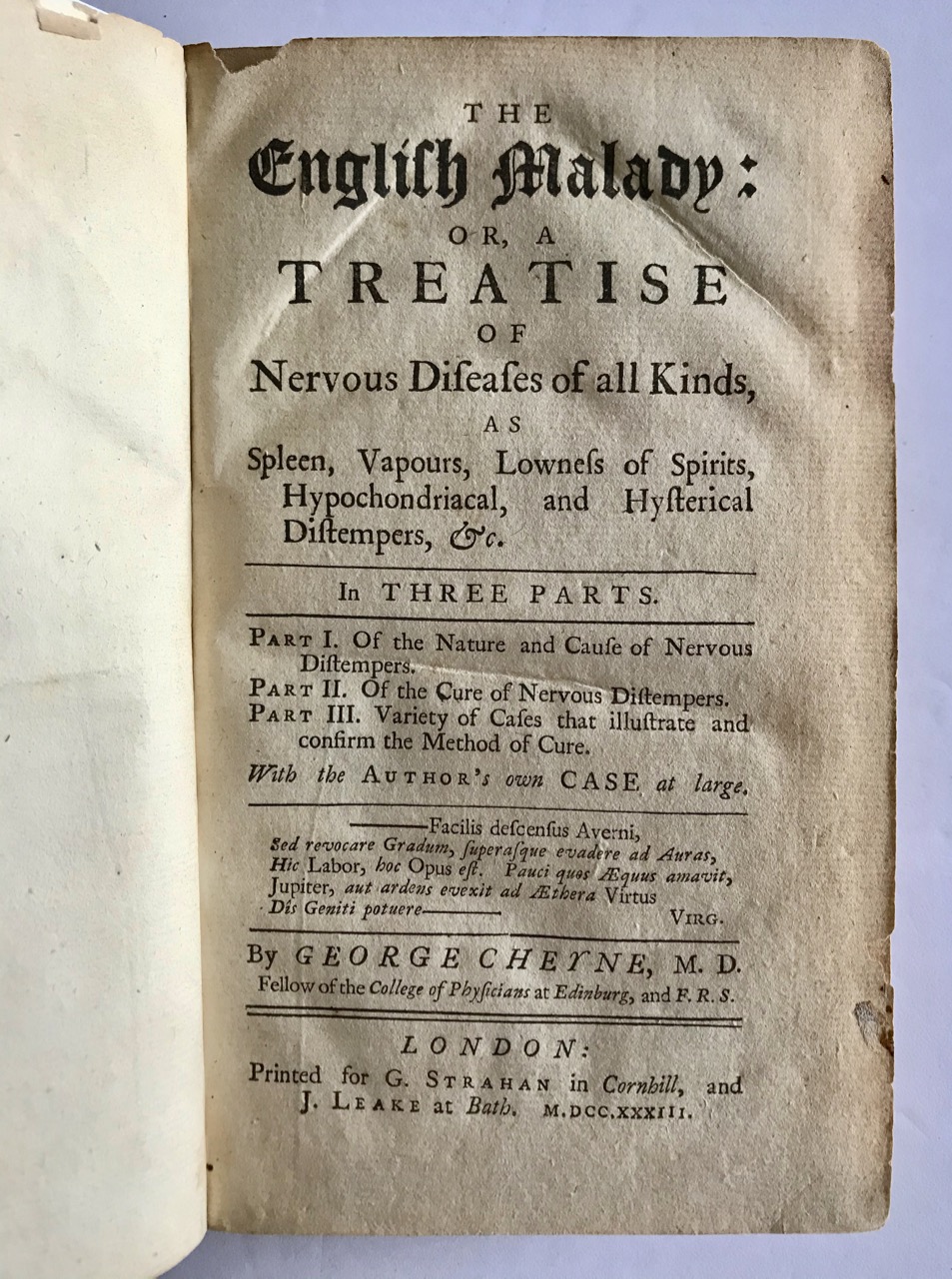 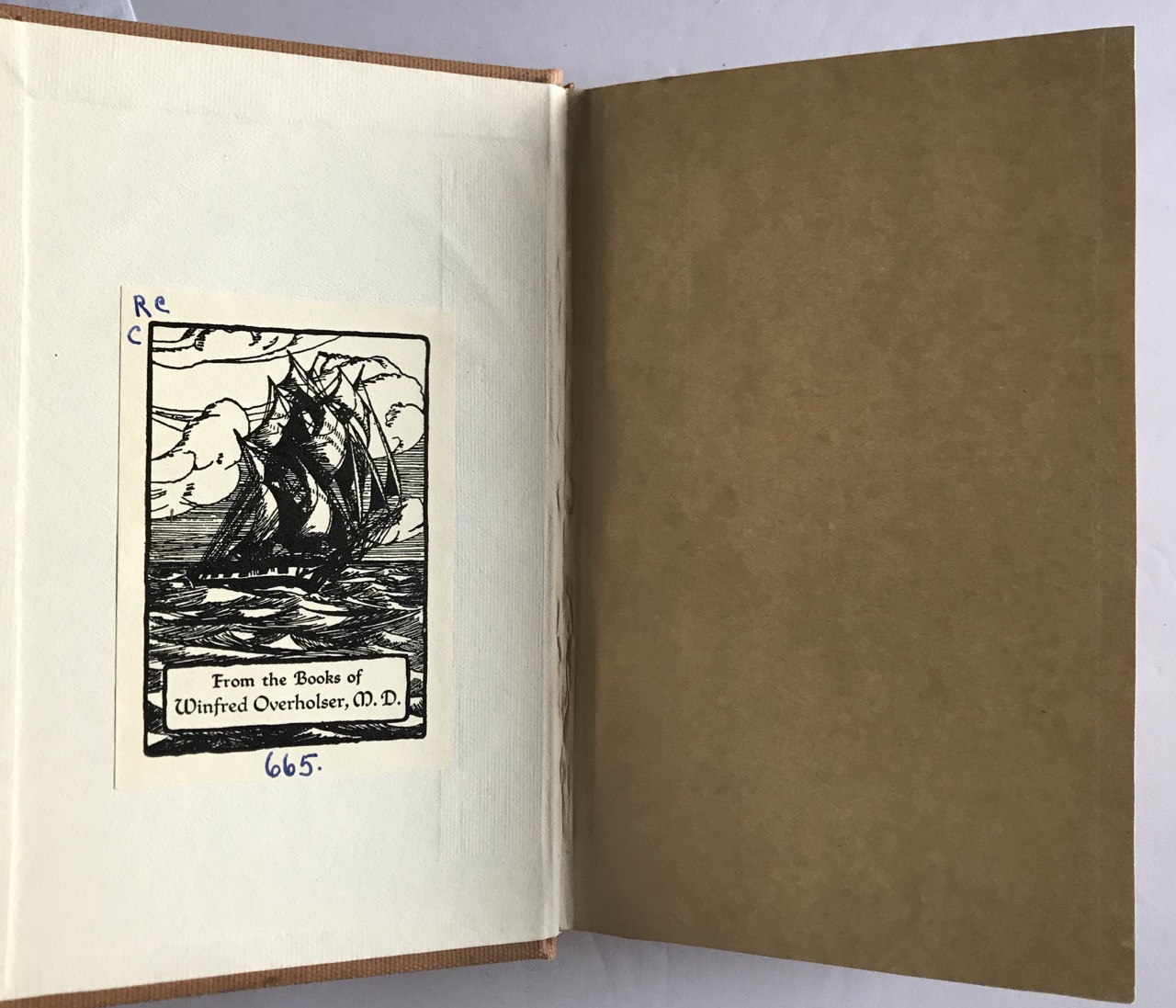 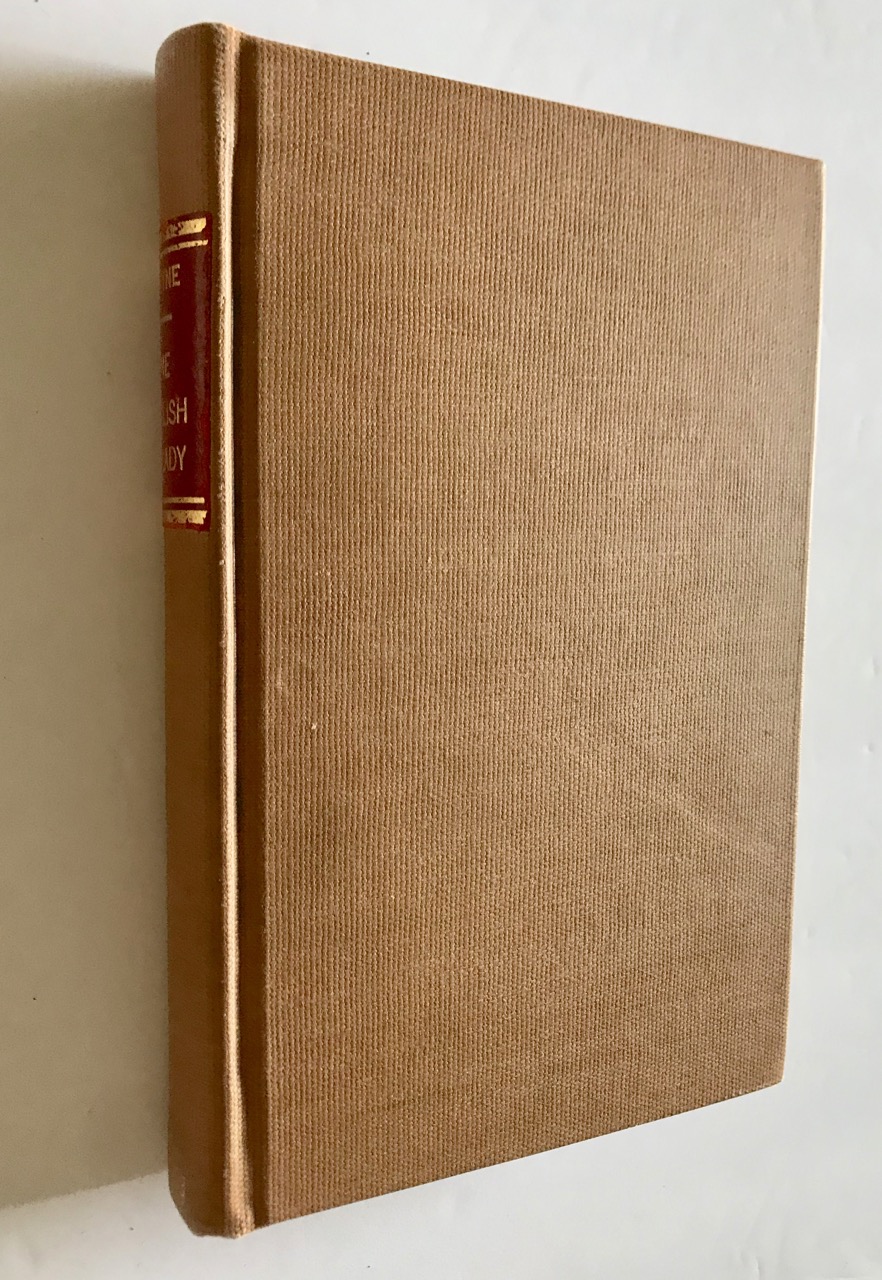 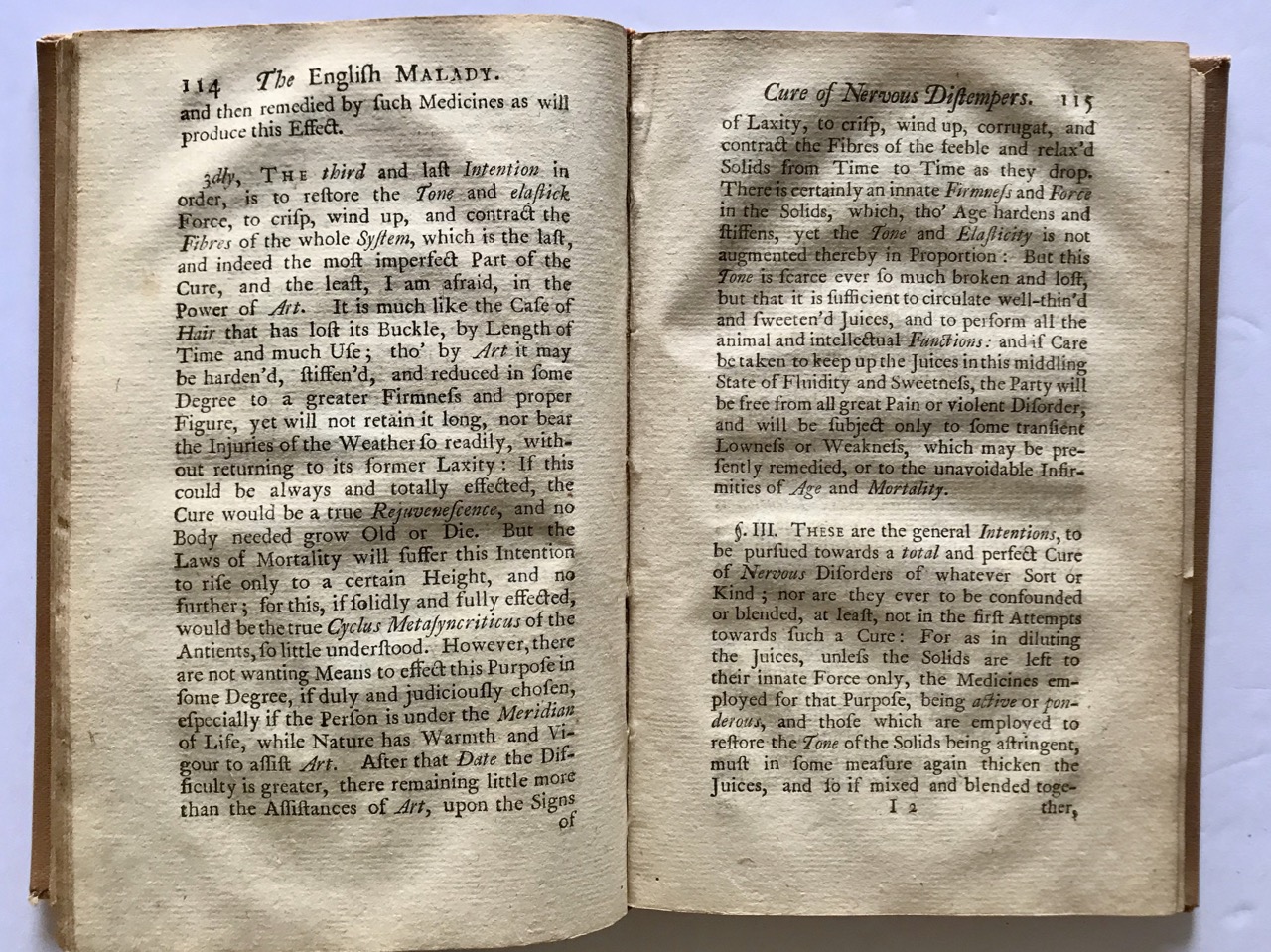 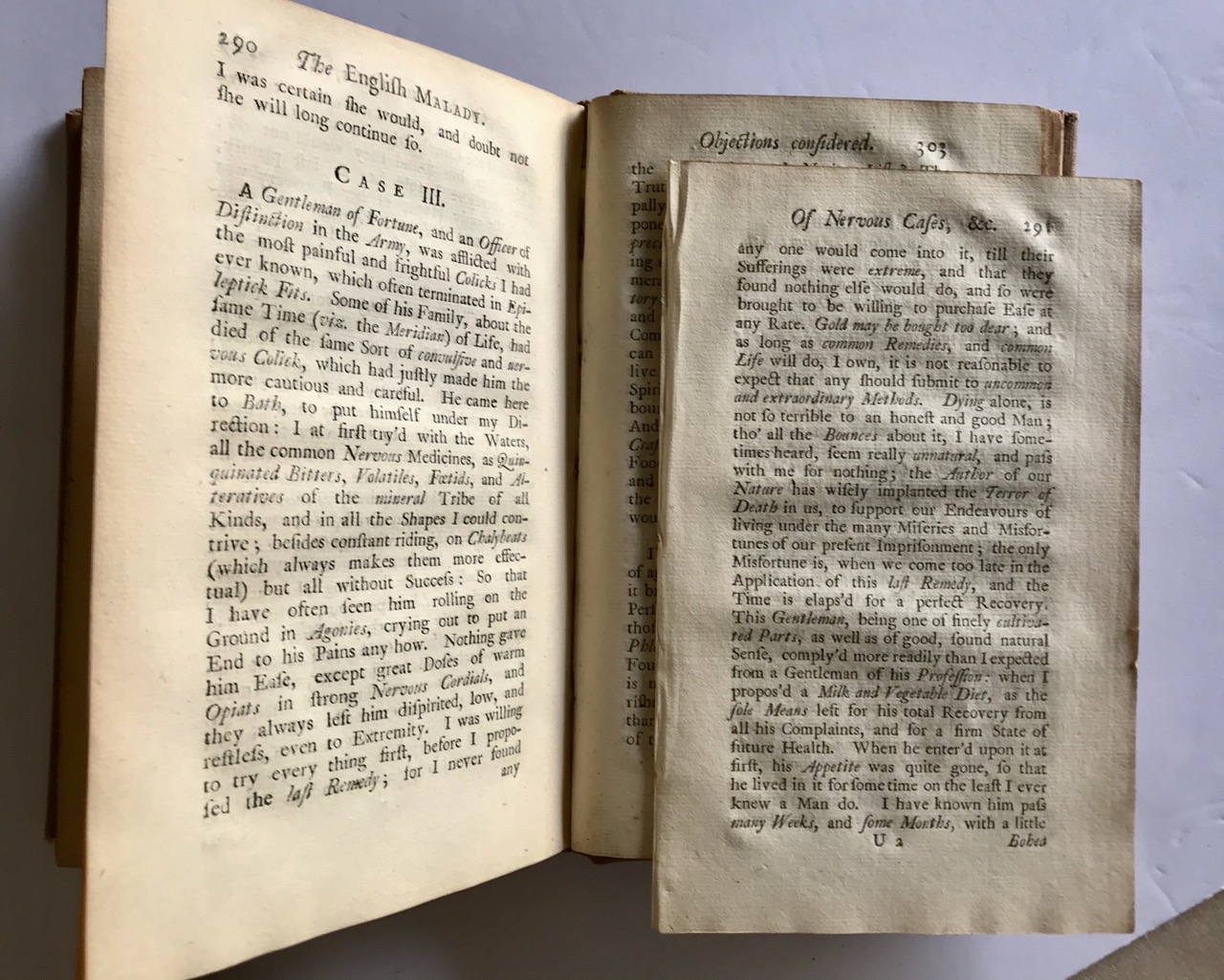 The English malady: or, a treatise of nervous diseases of all kinds.

The English malady: Or, a treatise of nervous diseases of all kinds, as spleen, vapours, lowness of spirits, hypochondriacal, and hysterical distempers, &c. London: printed by G. Strahan in Cornhill, and J. Leake at Bath, 1733. 1st edition. 8vo. 3 vols in 1. [6], xxxii, [2], 370pp. [6 advts]. Part I. Of the Nature and Cause of Nervous Distemper. Part II. Of the Cure of Nervous Distempers; Part III. Variety of Cases that Illustrate and confirm the method of Cure. In addition to the general title-page, each of the 3 parts have a title-page. George Cheyne M.D. R.C. E.d. R.S.S. (1671-1743) was a pioneering physician, early proto-psychologist, philosopher and mathematician who pioneed vegetarianism and wrote of animal rights Cheyne's term "English malady" refers to depression, the causes of which Cheyne listed as moist air, the variable English climate, too much meat and alcohol, sedentary habits and overcrowding. Cheyne's work inspired an interest in England in exploring the metaphysical relationship between mind and body. Rebound in tan cloth binding, circa 1940’s. Ex libris Winfred Overholser, M.D. with his bookplate inside front cover. Overholser was an American psychiatrist, president of the American Psychiatric Association, and for 25 years the superintendent of St. Elizabeths Hospital, a federal institution for the mentally ill in Washington, D.C. In 1940, he and his colleague Harry Stack Sullivan formulated guidelines for the psychological screening of inductees to the United States military. He also campaigned for recognition of alcoholism as a mental disease, calling it in 1940 "the greatest public health problem which is not being scientifically attacked. As early as 1941 he warned of the need to consider the mental health of an aging population and said that old age pensions could prove to be "one of the most important developments in the prevention of mental breakdowns in later life. Except for the modern binding, the volume is in good+ condition overall; a relatively clean tight copy with some toning to extremities but practically no foxing. One signature, pp. 290-302, has become detached.

Title: The English malady: or, a treatise of nervous diseases of all kinds.

The English malady: or, a treatise of nervous diseases of all kinds.