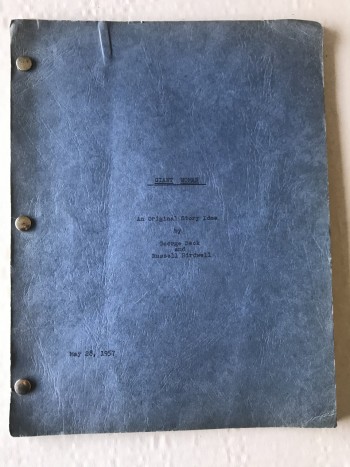 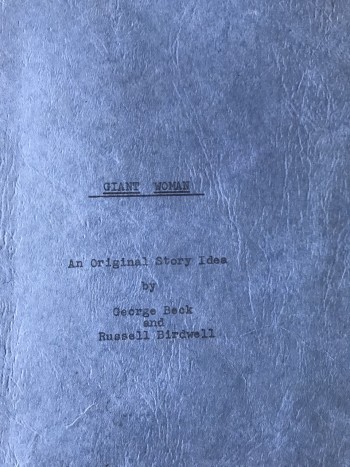 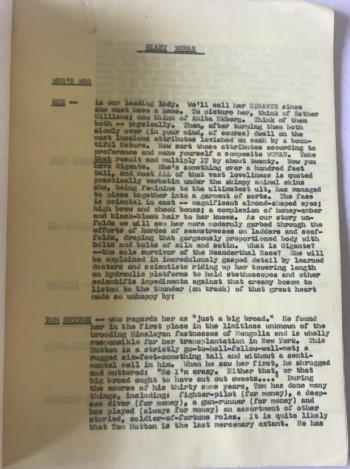 8-1/2x1, typed carbon, yellow paper. 12 looseleaf sheets in three post paper folder with typed titles; dated May 28, 1957. Completely different from the 1958 film Attack of the 50 Ft. Woman, but you have to wonder whether it gave someone at the studio the brilliant idea. “Think of Esther Williams; now think of Anita Ekberg. Think of them both -- physically. Then after turning them both slowly over [in your mind, of course] dwell on the most luscious attributes lavished on each by a bountiful Nature. …Take that result and multiply IT by about twenty. Now you have Gigante. She’s something over a hundred feet tall, and most ALL of that vast loveliness is quoted practically verbatim under the skimpy animal skins she, being feminine to the ultimate, has managed to piece together into a garment of sorts.” …. No aliens here; she is found in the limitless unknown of the brooding Himalayan mountains of Mongolia by our intrepid adventurer…later, in New York, jealous of the attention he pays to another woman she runs amok…”Up Broadway and down Fifth Avenue she strides, casually kicking taxis, trucks and busses out of her way…a squadron of fighter planes are warming up.” George Beck wrote the screenplays for several B movies during the 30’s and 40’s before moving in television where he wrote scripts for GE Theater, Make Room for Daddy, The Thin Man, Lassie, the Many Loves of Dobie Gillis, and others. Russell Birdwell spent 25 years as a studio publicist before writing the screenplay for Jim Thorpe - All American and several other B-films. A fine copy overall with some wear and fading to paper covers.