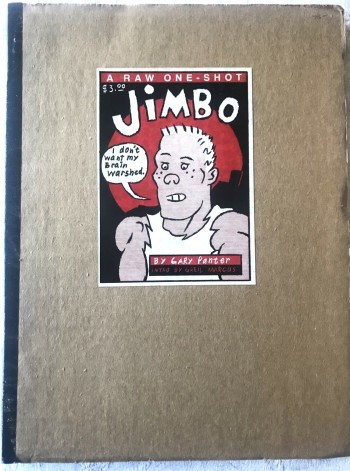 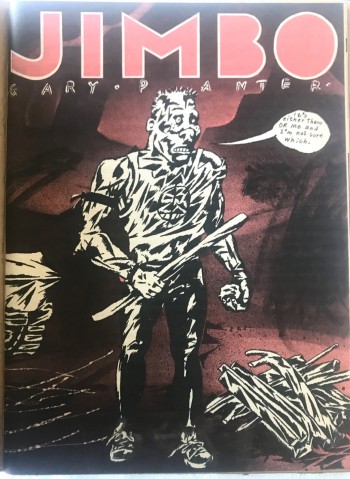 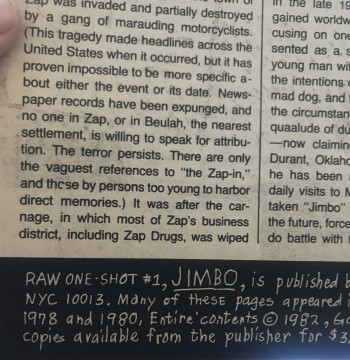 1st printing [no additional printings stated]. 38pp. Tabloid-sized comic magazine printed in duotone and b/w on newsprint. Attached at rear to corrugated cardboard coves, as published, with paper label on front and black tape spine. No. 1 in Raw Magazine’s “One Shot” series, this is an anthology of strips featuring Panter’s post-apocalyptic punk “Jimbo” An innocent, spikey-haired, freckled-faced wanderer, surviving in a post-nuclear no-future. Many of the individual stories first appeared in punk-zine Slash between 1978 and 1980, but there are also a number of full-page illustrations published here for the first time. In addition to his comic and graphics work, Panter created the Emmy-winning sets for television’s PeeWee’s Playhouse. He was among the artists honored in the exhibition "Masters of American Comics" at the Jewish Museum in New York City. In 1997, Panter felt Jimbo calling again and led him to conceive two extraordinary graphic epics, Jimbo In Purgatory and Jimbo’s Inferno. Both are huge in their hardback format and their ambition to reinterpret Dante’s for the 21st century. MINT: Very prone to wear, this is an unusually fine copy.