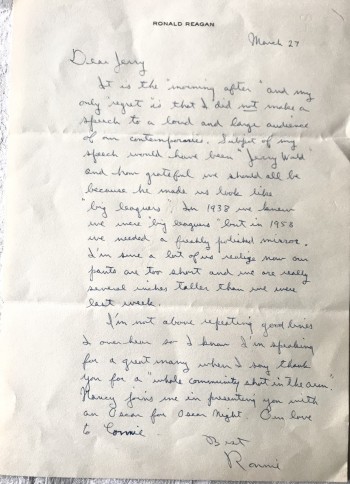 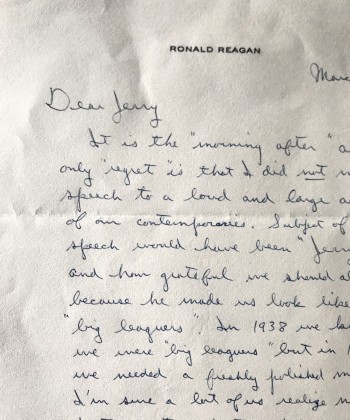 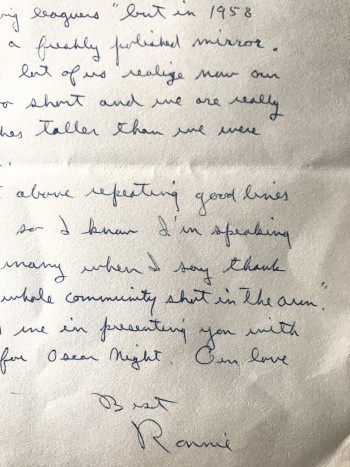 A one-page handwritten letter from Reagan to his close friend, film producer Jerry Wald, thanking him for his televised production of the 31st annual Academy Awards [1959]. 7-1/2”x11”, 1 page, on Reagan’s personal letterhead, dated March 27 [1959] “Dear Jerry / It is the “morning after” and my only regret is that I did not make a speech to a loud and large audience of our contemporaries. Subject of my speech would have been “Jerry Wald and how grateful we should all be because he made us look like ‘big leaguers.” In 1938 we knew we were “big leaguers” but in 1958 we needed a freshly polished mirror. I’m sure a lot of us realize now our pants are too short and we are really several inches taller than we were last week. / I’m not above repeating good lines I overhear so I know I’m speaking for a great many when I say thank you for a “whole community shot in the arm”. Nancy joins me in presenting you with an Oscar for Oscar Night. Our love to Connie / Best Ronnie” Reagan did not appear on the telecast himself; he was in his final year as president of the Screen Actors Guild [but had presented the previous year, which Wald had also produced]. Jerry Wald [1911-1962] had a nearly 30-year career as screenwriter, director and producer. Among his classic films were The Roaring Twenties, The Man Who Came to Dinner, Destination Tokyo, Key Largo, Mildred Pierce, An Affair to Remember, and The Long Hot Summer. He earned “Best Picture” Oscar nominations four times but never won the coveted award. He received the Irving G. Thalberg Memorial Award in 1949. Wald also wrote the screenplays for the Humphrey Bogart dramas The Roaring Twenties (1939) and They Drive by Night (1940) Provenance: from the estate of his Wald’s wife Connie, who died in 2012. Reagan starred in three of Wald’s films (1942, 1949, 1952) and they remained long-time friends. Our Warranty: Signed Books and Autographs Unless otherwise noted all autographs, signatures, and inscriptions are guaranteed to be authentic and in the author’s or artist’s own hand. We have been dealing in rare books and ephemera for more than thirty years and are confident in our ability to self-certify the authenticity of everything we sell. If we are unable to authenticate an item with certainty, we note this clearly in the description and either price the item as if it were unsigned or price it with a disclaimer at a substantial discount. If you have any questions or concerns, don’t hesitate to contact us.