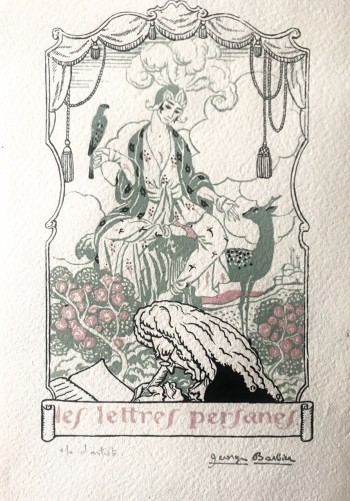 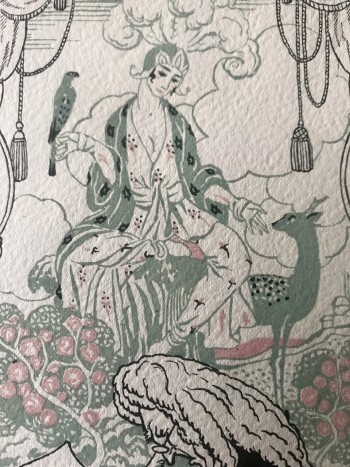 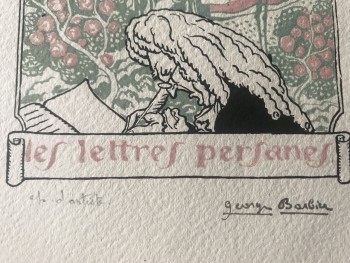 A frontispiece design for the book “les Lettres Persanes” [Persian Letters} by Charles-Louis de Secondat, baron de Montesquieu. 4.75”x7.5” printed in pale green, black, and dusty rose on rag paper. An image of a woman in oriental garb with feathered hat and holding a parrot. Drawn by Barbier as one of a series of 100 frontispieces by a variety of artists engraved and printed by Francois-Louis Schmied in 1918 in a limited edition of fifty portfolios. [Les Cent Frontispieces, n.p., n.d. [1918]]. Each portfolio was comprised of ten fascicules containing ten engravings or prints by twenty-one artists. Barbier contributed three of the 100 illustrations. Complete sets are extremely rare; none presently in World Cat. This is an artist’s proof, noted in pencil at lower left; Barbier’s full signature in ink at lower right. Untrimmed right and lower edges; a fine pristine copy. George Barbier (1882–1932) was one of the great French illustrators of the early 20th century. He was 29 years old when he mounted his first exhibition in 1911 and was subsequently swept to the forefront of his profession with commissions to design theatre and ballet costumes, to illustrate books, and to produce haute couture fashion illustrations. For the next 20 years Barbier led a group from the Ecole des Beaux Arts who were nicknamed by Vogue "The Knights of the Bracelet"—a tribute to their fashionable and flamboyant mannerisms and style of dress. In the mid-1920s he worked with Erté to design sets and costumes for the Folies Bergère and in 1929 he wrote the introduction for Erté's acclaimed exhibition and achieved mainstream popularity through his regular appearances in L'Illustration magazine. Barbier died in 1932 at the very pinnacle of his success.