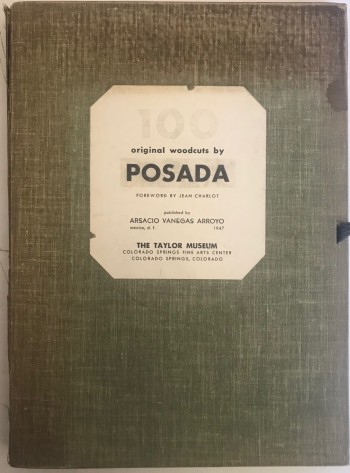 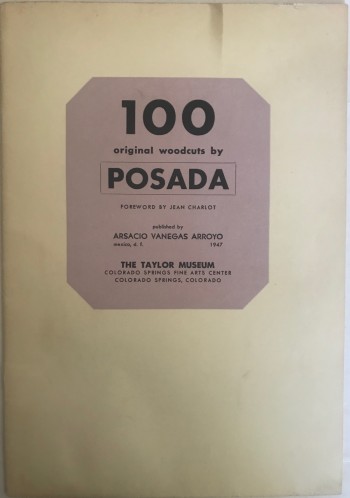 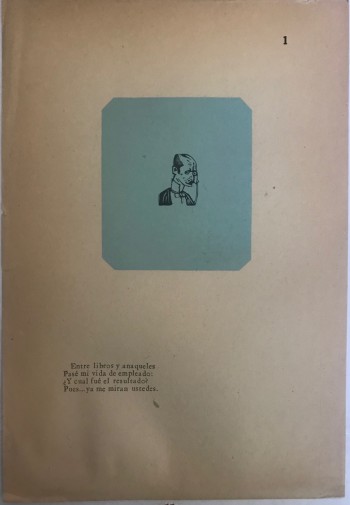 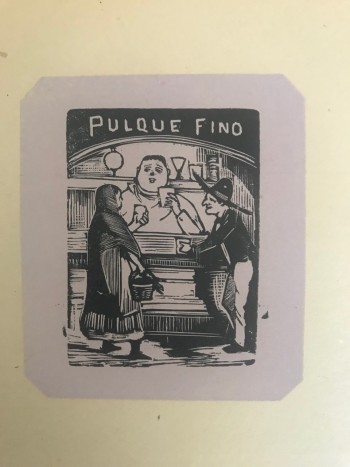 Limited edition of 450 copies, of which 400 were for sale with 25 each reserved for Arroyo and Charlot. 100 loose numbered leaves with a woodcut on each and a 31-page pamphlet containing a foreword by Jean Charlot, introduction by W.S. Stallings, and a bibliography of Posada’s works. Each woodcut measures 1”-2” inside a 2-1/2”x3-1/4” solid pastel frame and printed on 6.5”x9.5” beige pulp paper -- Spanish verse at bottom. The plates are pulled from Posada’s original press. Pamphlet: beige stapled wrappers printed in violet and black. This copy is one of Charlot’s 25 reserved copies, initialed in pencil by him on the limitation page “J.C. 11/25”. The pamphlet is very good; no nicks or tears but lightly toned at extremities with a small smudge upper front cover. There is also a light damp stain at bottom to a height of about ½” throughout. The 100 plates are complete and VG- fine overall -- printed on pulp so there is some light toning to edges and occasionally the margins but no damage. The damp-stain to the pamphlet has not affected the plates. All housed in a gray-green linen covered chemise with string tie. The chemise is intact, but the front cover is nearly detached and back cover partially split; toned along all edges, and moderate wear to the internal flaps. Paper label similar to the pamphlet printed in b/w on the front is faded. This joint publication by Arroyo and Charlot was released in two states. The copies published by Arroyo in Mexico City in loose paper covers of the same size and with the title and publication details in both English and Spanish. [100 Grabados en Madera por Posada] Only Arroyo is shown as publisher. This information is repeated in a 14pp. loose folio [1] 12 [1] with a brief description in Spanish of the contents followed by the same in English, photographs of Posada and publisher Antonio Vanegas Arroyo, and a forward by Jean Charlot in both Spanish and English. The separate 31-page pamphlet contains a table of contents, a foreword by Charlot, an introduction by W. S. Stallings, Jr., a bibliography, and translations of the verses that accompany the plates -- all in English only. For the U.S. distribution, the Taylor Museum added the linen exterior chemise, with titles in English only. This copy lacks Arroyo’s bilingual cover and all but one of the fourteen leaves of the added folio. Present is the last leaf containing Arroyo’s copyright and a statement of errata. “The quatrains that appear in the present album, contain several errors and spelling, which I have wanted to respect, to present them as they were published.” The omission of the 14pp. folio may have been a design choice for the U.S. publication. Charlot moved his family to Colorado Springs in 1947 to take over as head of the Colorado Springs Fine Arts Center Art School, where the Taylor Museum is located. Except for the photos of Posada and Arroyo, the extra folio in the Arroyo copies is a bilingual replication of the Table of Contents and Charlot’s forward from the 31-page English language pamphlet. Charlot may have felt that Arroyo’s Spanish-only cover and bilingual supplement were unnecessary for the U.S. distribution -- retaining only Arroyo’s copyright and errata page. We are speculating, of course, but note that Taylor Museum copies in the Library of Congress and OCLC also appear to lack the Spanish cover and bilingual folio of the Arroyo edition. Whether complete or incomplete, this copy appears to be the first of the 25 copies signed by Charlot to appear on the market; none of the copies in institutional holdings or in available auction/catalog records are so noted. From the introduction: "… Posada’s principal techniques for his larger works were engraving on type-metal and relief etching, by which he is principally known. His woodcuts are mostly small and mostly were made for vignettes. Almost all of the surviving blocks are published here for the first time since Posada’s day. Many either never have been published before or the original broadsides in which they appeared have been destroyed, as was their nature. Many are portraits; many are caricatures. Whereas in his larger works we are most often struck by Posada’s vigorous burin and monumental composition, in these woodcuts we see to best advantage his fine line, the work of a man who used his graver with consummate delicacy and skill … The plates were printed in Mexico by the House of Vanegas Arroyo, where they were purchased by the Taylor Museum. Herbert Bayer designed the cover and the title-page … [Jean] Charlot and Don Blas selected the original blocks, still owned by the firm, and Don Blas supplied, from the archives of the house and very probably from his own head, the little verses which, in traditional manner, accompany the plates. Many of these verses are known to have appeared in the original broadsides (though not always accompanying the same vignettes), and Don Blas tells us, in a special declaration, that he has left their popular and non-academic grammar alone, out of respect to their original form. While most of the verses are undoubtedly not those which inspired the original engraving of the associated block, they are in the same spirit. … Almost all of the verses are satiric; some are nonsense rhymes. For the benefit of non-Spanish readers … English translations … give some sense of their contexts. However, the originals depend for their wit on a double and even triple entendre and a play of words almost always impossible to render in translation."